Where to bet and where not to bet: a study into 2017 Starting Prices in British horseracing

The Horseracing Bettors Forum has undertaken a study into Starting Prices in Britain in 2017, measuring the “over-rounds” compared to what might be expected given a race’s field size.

“Over-rounds” are the bookmakers’ theoretical mark-ups and are derived from the sum of the amount that would need to be staked to return a fixed figure at each of the prevailing prices.

For instance, you would need to stake £20 at 4/1 to return £100 (your £80 winnings plus your £20 stake) but just £10 at 9/1. If you add up all of these stakes it indicates the amount which would need to be invested in proportion to the odds of all of the runners in a race to return £100 regardless of the outcome.

The difference between the amount staked and the amount returned – 10% or 20% perhaps – is the theoretical “over-round” which works in the bookmakers’ favour (though at this stage it must be acknowledged that a bookmaker is unlikely to lay every horse in strict proportion to that horse’s odds).

Over-round is affected by field-size, but not in a simple, linear, fashion. That is why a measure other than over-round-per-runner needs to be used.

HBF used an equation derived from a study into Starting Prices in 2014 by HBF member Simon Rowlands (https://www.timeform.com/horse-racing/features/rowley/Rowleyfile_Investigates_The_Industry_Starting_Price,_part_one) and then established the degree to which actual Starting Price over-rounds differed from that simple prediction.

The following are some of the findings.

Summary tables can be found at the bottom of this piece, but it is worth just dwelling on the figures by individual course. In particular, the over-rounds at Ffos Las in 2017 were frequently out of kilter with what might be expected and merit investigation.

Something odd is going on at the South-Wales course, with nearly all races disadvantageous to punters betting at Starting Prices compared to expectation, and sometimes by large amounts.

Ffos Las may be a course to steer clear of until an explanation – not to mention a solution – has been provided. 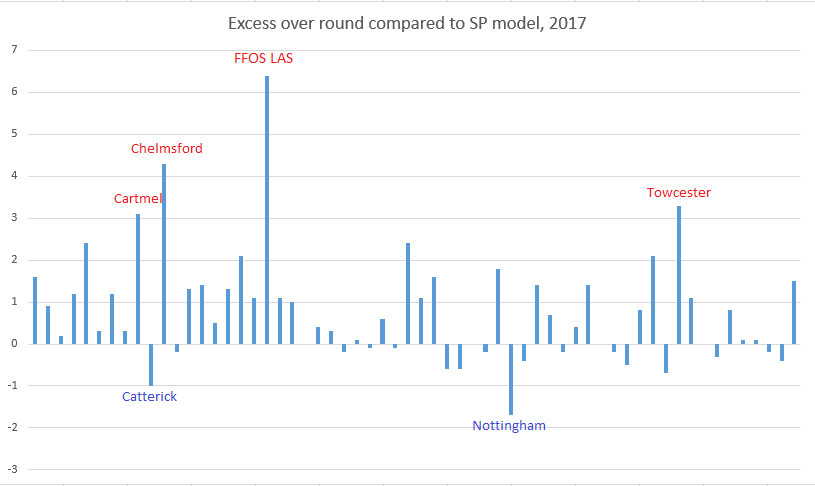 Summary of methodology: races in which the same number of declared horses as runners were used to avoid skewing by late withdrawals; the average difference from “par” was taken for all qualifying races at a course; “par” was taken to be [100+(field size*((-0.0245*field size)+1.9286)]