The Horseracing Bettors Forum (HBF) has carried various analyses in to the Starting Price since horse racing resumed on the 1st June 2020 following the nationwide lockdown.

Since the resumption the HBF have been monitoring the Overround Per Horse (OPH). Races with odds on favourites and late withdrawals have been removed providing a dataset of 2147 races.   The analysis below shows the OPH by week since the resumption of racing on 1st June 2020. The graph below shows the OPH week by week, it can be seen that after an initial OPH of 1.35% in week 1 this rose to 1.50% in weeks 2-4, hit a high of 1.70% in week 5 and has now steadied around 1.60% since week 6. It is unclear the reason for the significant variation during weeks 1-5. 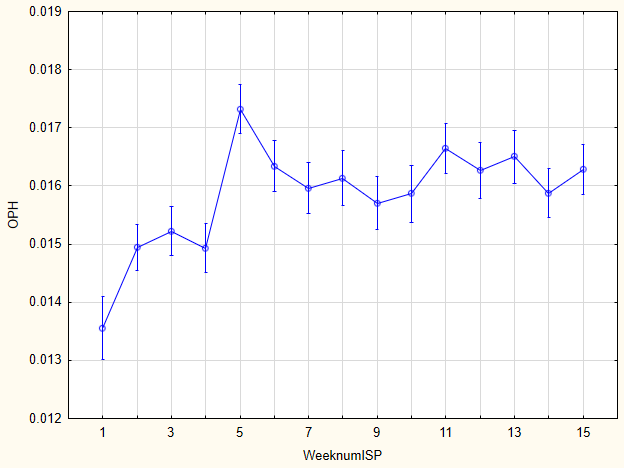 The HBF then looked at the average price of favourites in handicap and non-handicap races split by the number of runners. Since the resumption of racing 1186 non-handicap races and 1783 handicap races were analysed to create the Industry SP (ISP).  These were compared to a 15,000 race sample collected from 2015-2019 which derived the on course SP from the betting ring.

The results showed that for non-handicaps the average favourite ISP was lower in 7, and higher in 6 categories split by the number of runners.

However, in handicap races the results showed that only in 4 runner races was the  ISP greater. All of the 12 other categories split by the number of runners showed that the average price of the favourite was now lower than when it was collected from the betting ring. Noticeable was how much shorter the SPs were for races with 14,15 and 16 runners which showed that SP bettors were on average were worse off by about 0.6 of a point.

The final analysis was to compare how well bettors would have done betting at different ranks in the betting market, where rank 1 is the favourite and 2 second favourite etc. For each rank an average SP has been derived.

This uses data from 1st June – 17th September 2020 for the  ISP and compares course derived SP using a data set from 2015-2019. It should be noted that there are horses with the same odds so they will have the same rank. However, this does not alter the calculations significantly. All field sizes are included so there will be more horses with low SP ranks than higher ones.

For example, blindly backing the favourite with on course SP would have given a loss of 6.42% whereas with the ISP it would have been more, a loss of 7.98%.

Looking at the table, it can be seen that the ISP produces worse returns for the bettor until the 5th ranked horse from then on the ISP is better.

Overall if a bettor blindly bet the first 16 horse in the betting, they would be better off with the ISP as the loss would have been 21.45% as opposed to 26.35% from the on course SP.

This shows that at the front end of the market the ISP favours the bookmaker more than the old on-course SP. In contrast, the situation reverses as for the less fancied runners.

Since the resumption of racing on the 1st June 2020, the HBF has found that while the headline overround per horse has improved from an overage of 1.90% to 1.60% there has been a reduction in the price of horses at the head of the market and an increase in the price of outsiders.  Also of note was the reduction of the starting price of favourites in handicaps compared to the on course SP.

The HBF have provided these findings to the SPRC and to the Gambling Commission. 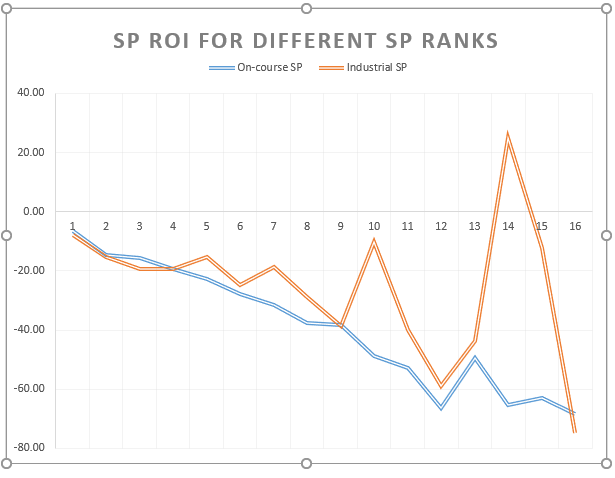