The Industry Starting Price was started on June 1st 2020.  This paper shows how it has performed over the last few months and follows on from the analysis carried out in September which can be found here:  https://ukhbf.org/hbf-news/hbf-starting-price-analysis-september-2020/

Races with odds-on favourites and fewer than five runners are excluded as these give markedly higher over-rounds due to place betting and small field size respectively.

The graph below shows the average OPH for each month since January 2017. 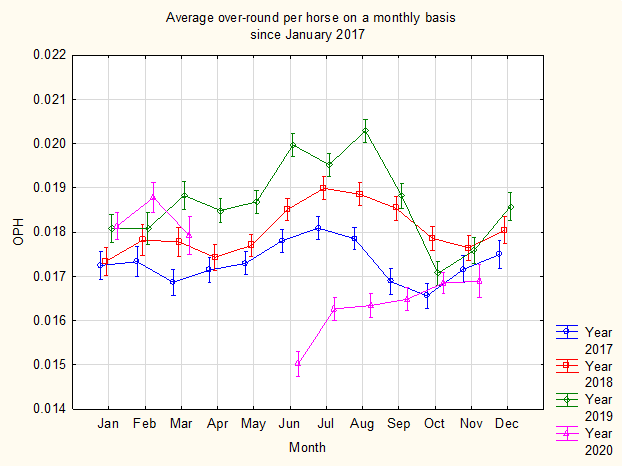 There are several features to this table which is based on a total of 28806 UK races since January 2017. In the years 2017-2019 the OPH was derived from the on-course SP returns whereas 2020 was derived from the new industry SP. There was no racing between mid-March and June 2020.

The OPH produced on-course varied during the year being higher from June to September coinciding with the flat season.

Looking at the years 2017-2019 there is a slight rise over these three years especially in the aforementioned summer months.

The 2020 OPH for the industry SP was a lot lower than the previous on-course SP when it was introduced in June. However, since then it has shown a steady increase and is now only slightly lower than last year’s on-course SP.

We can look at the return on investment or ROI that bettors can get at SP.

Initially, results for flat racing with the industry SP showed that those betting at the front end of the market were indeed worse off and those backing less-fancied horses were better off.

Now there is more data available the result is similar but a little more nuanced. Because we are including National Hunt racing with smaller fields particularly in non-handicap events, we need to look at these separately.

The following are the figures in handicaps:

In non-handicaps, in which smaller fields mean it is best to consider the first two in the betting, the figures were as follows:

A similar picture emerges with bettors at the front end being 1.8% worse off whilst those betting outsiders are 3.9% better off.

Considering that most money is bet on shorter-priced horses the new industry SP favours the bookmakers rather than the bettors.

Further to this, many multiple bets include one, or more, shorter-priced horses so this helps the bookmakers further.

Finally if the SP is kept short their liabilities due to Best Odds Guaranteed (BOG) are reduced.